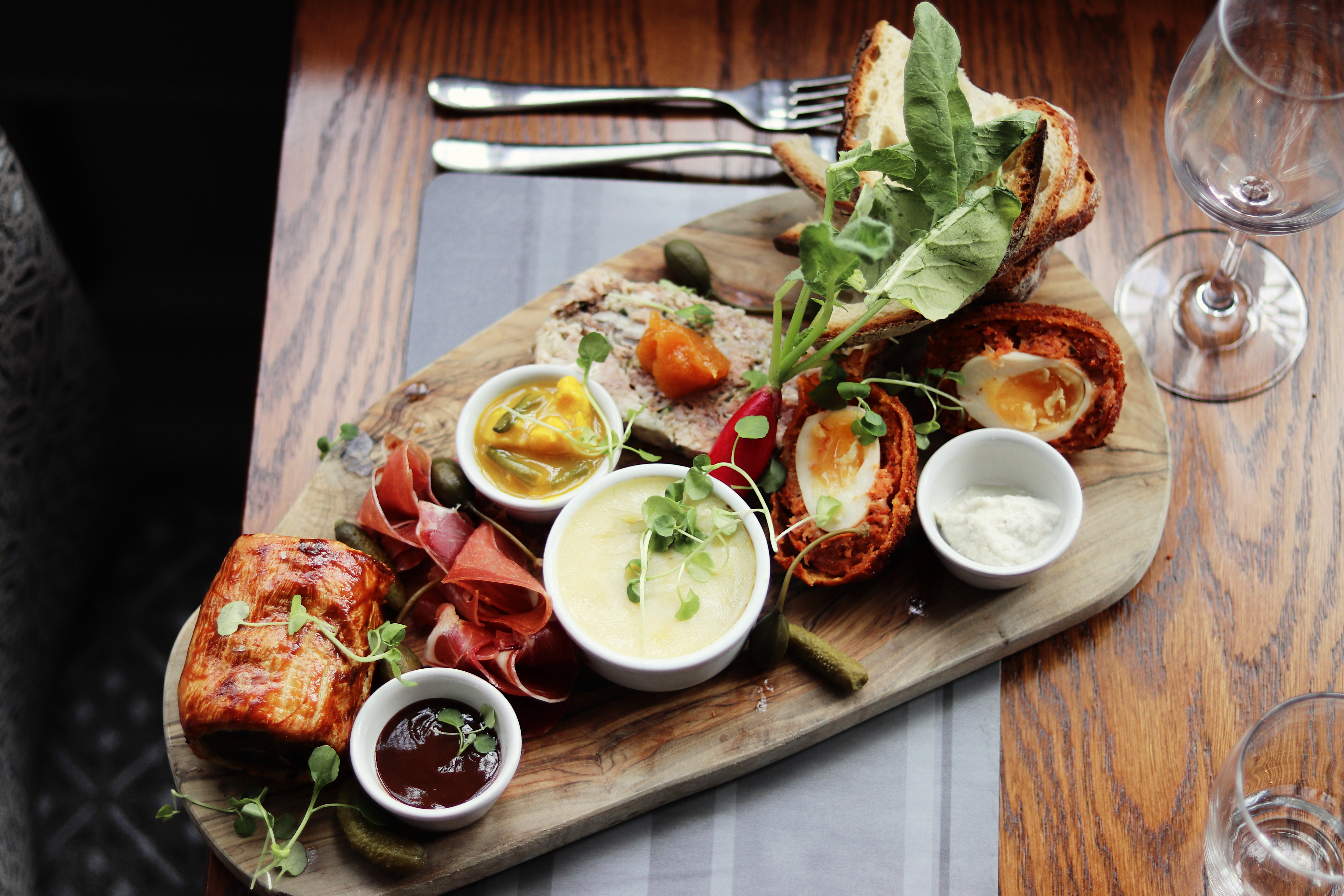 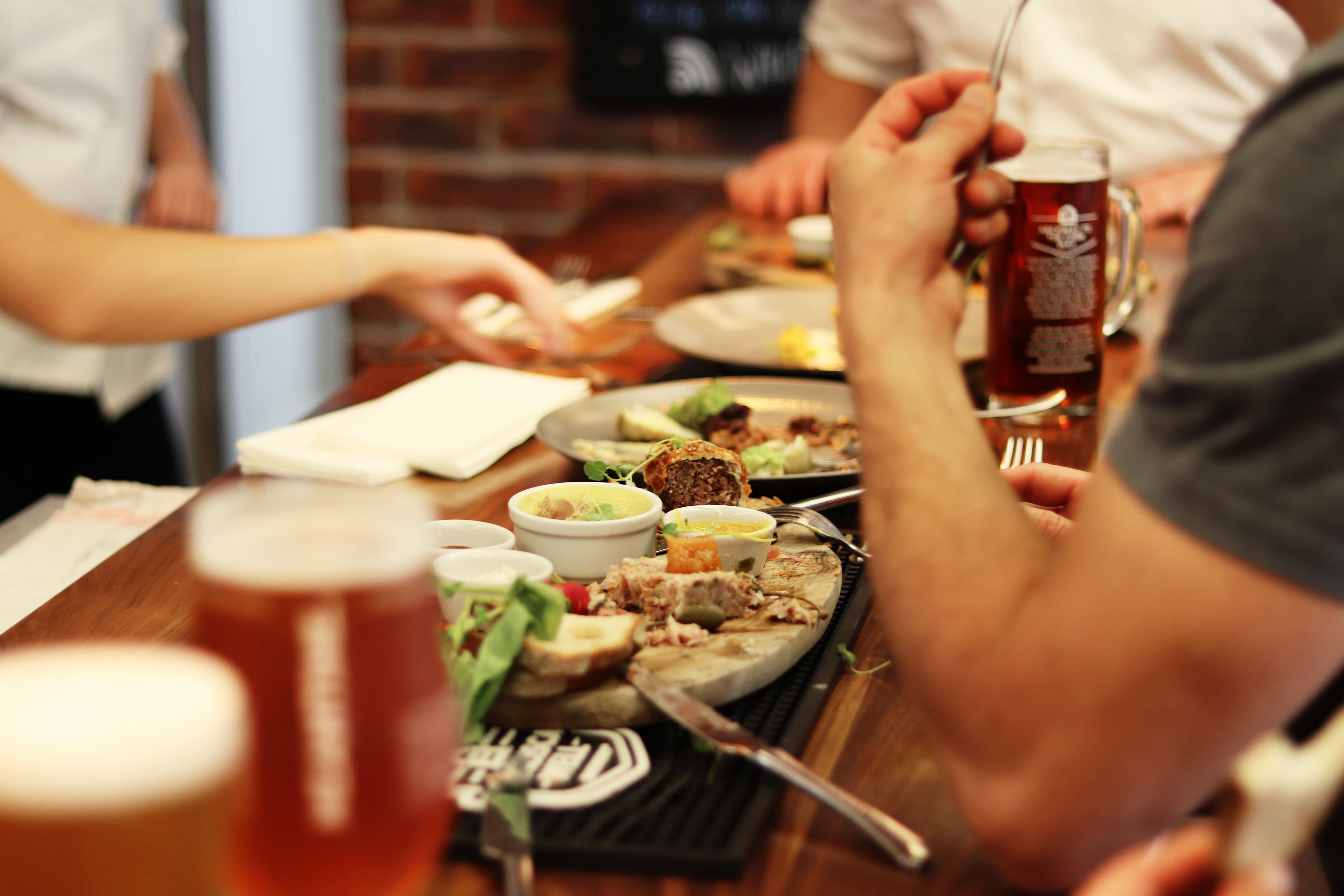 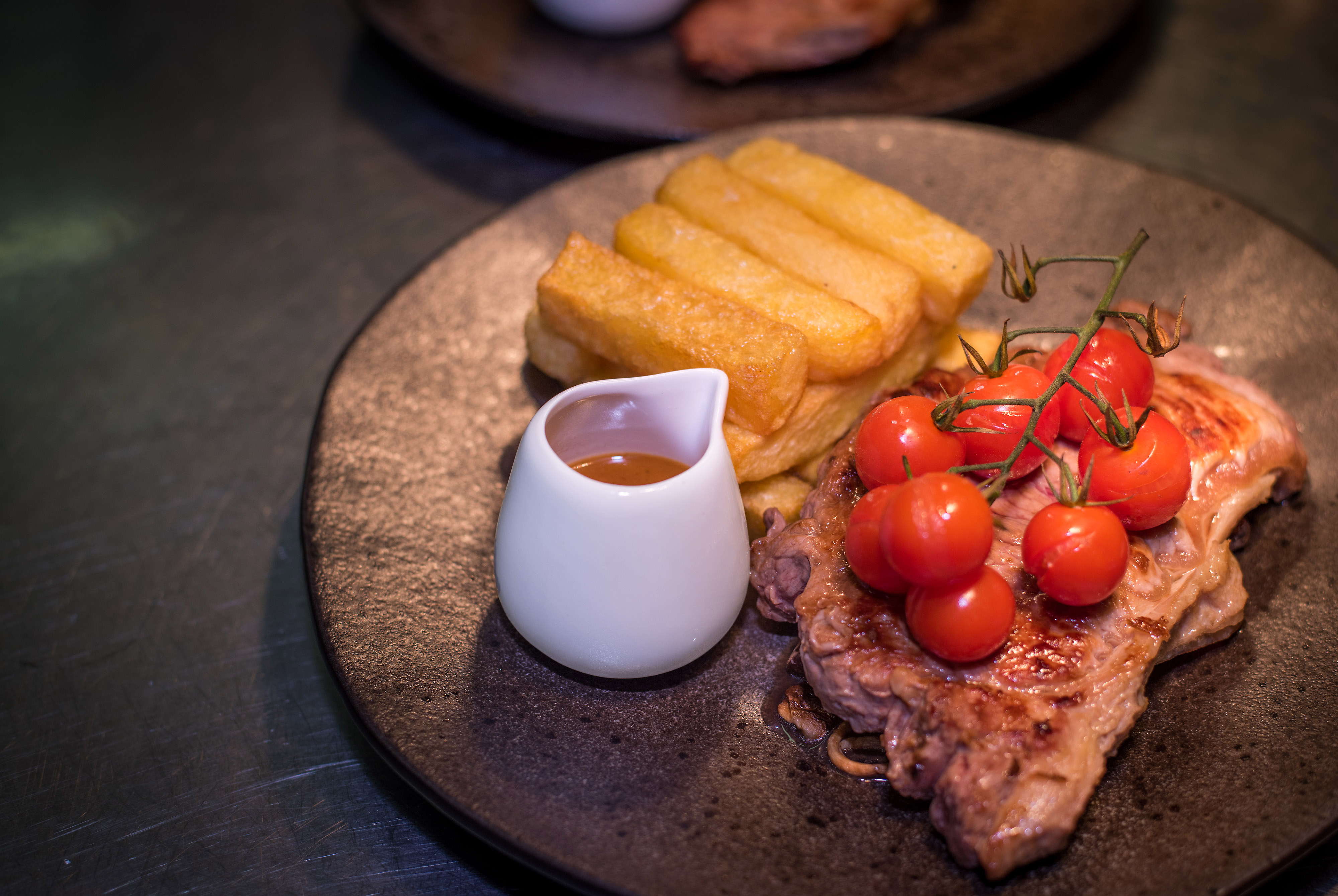 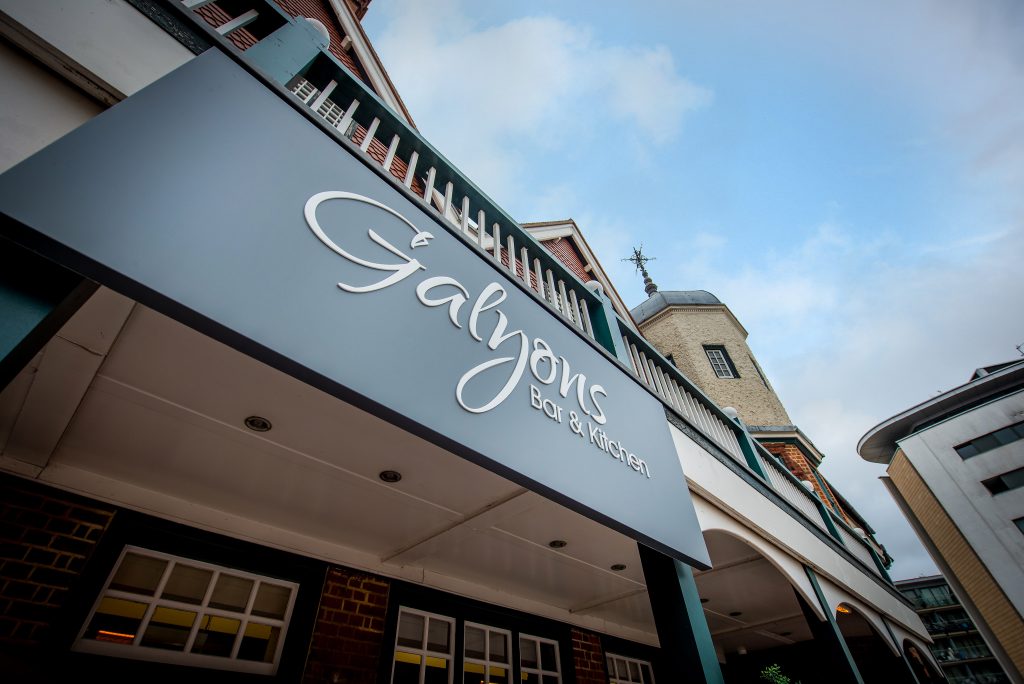 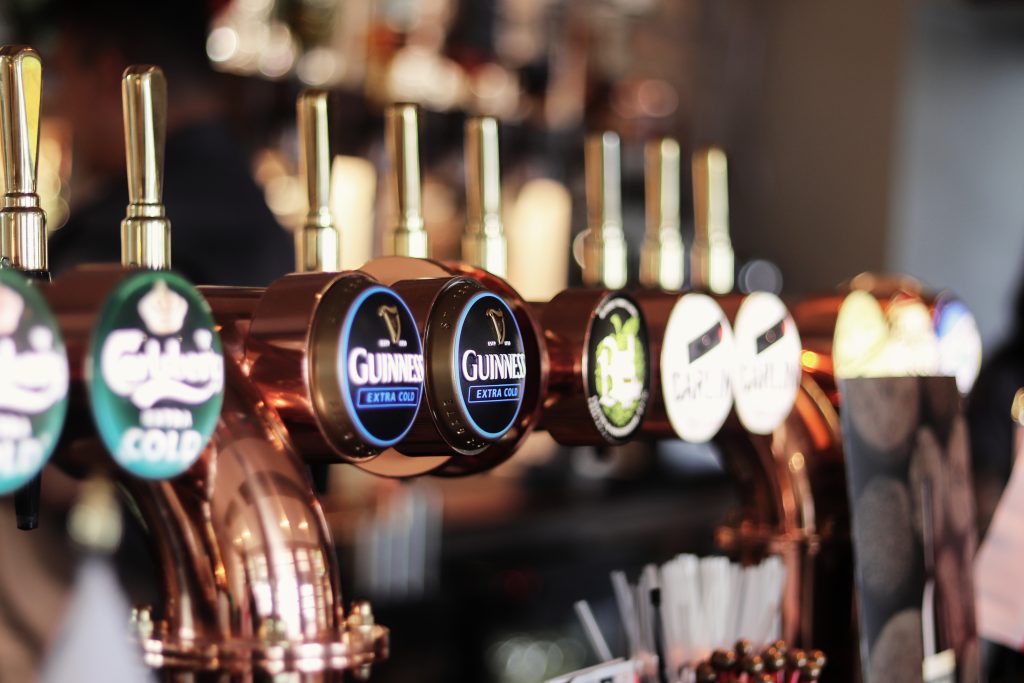 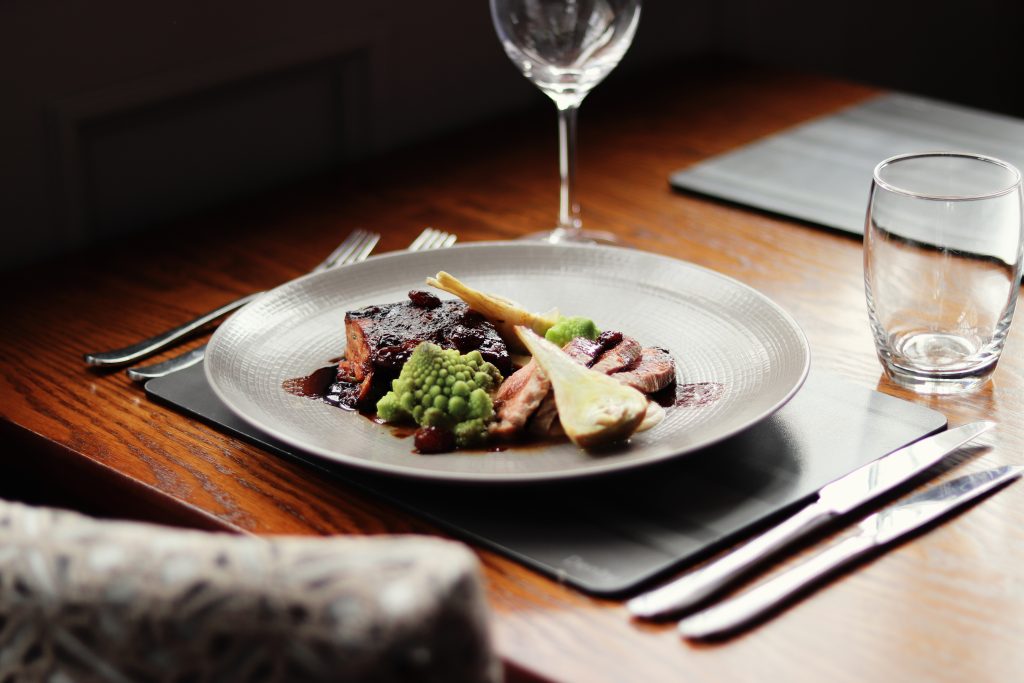 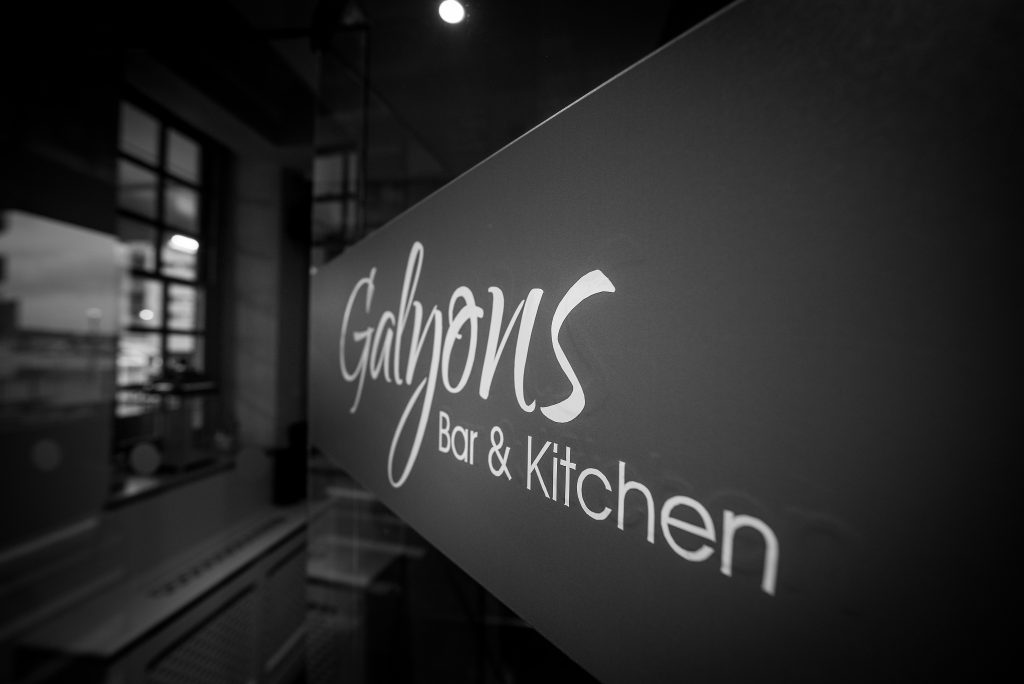 “Here at Galyons along with our dedicated team we try to create a modern take on traditional food with our own flare stamped on every plate. Using the finest locally sourced ingredients where possible, everything from breads, cured salmon, pastry, ice creams and jus are made in house ensuring you have a memorable dining experience” 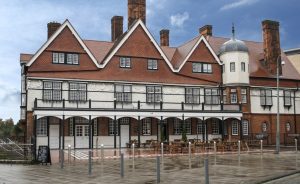 The Galyons were a 14th-century family who owned property on the shoreline. Gallions Point, at the entrance to the King George V Dock, is nine nautical miles below London Bridge. In 1878 Gallions Reach was the scene of the Thames’ worst ever disaster, when the Princess Alice pleasure steamer sank with the loss of more than 600 lives.

Gallions Reach DLR station is located to the north-west of its predecessor, Gallions, a ship-to-rail transfer point on the Port of London Authority’s railway. Gallions had opened in 1880, but closed with the branch line in 1940.

The grade II* listed Gallions Hotel was built between 1881 and 1883 for the Peninsular and Oriental Steam Navigation Company, to accommodate travellers who were halting overnight. Rudyard Kipling stayed at the hotel when he was setting off for India, and the author mentions the place in his novel The Light that Failed (1890): “Is it Tilbury and a tender, or Gallions and the docks?”

After standing empty for many years, Gallions Hotel has recently been thoroughly renovated as part of a deal that has allowed it to be engulfed by upmarket apartment blocks. A ‘bar and kitchen’ called The Reach opened in the hotel building in 2013.

Several buildings from its original heyday still exist however, helping to preserve its long and fascinating history as one of the world’s most important ports. One such building is the GradeII listed Gallions Hotel (also sometimes referred to as The Gallions), which can be found at Gallions Reach. Built by the London and St Katharine’s Dock Company between 1881-1883, the hotel was opened to serve the passengers of ocean liners on the nearby Royal Albert Dock, in particular those owned by P&O.

It was designed by George Vigers and Thomas Wagstaffe, with additional flourishes said to be by the artist Edwin Roscoe Mullins. It also boasted its own railway station, with doors that opened directly onto the platforms. The station opened in 1880 as part of a branch line of the Eastern Counties and Thames Junction Railway, and was later resisted in 1886, before finally closing to passenger services in 1942.

The hotel later became a Trumans Brewery pub, and earned itself something of a bad reputation that is perhaps best summed up by its alleged nickname; the ‘Captain’s Brothel’. It is also briefly referenced in ‘The Light That Failed’ by Rudyard Kipling.

Closure came in 1972, after which followed years of dereliction. It was then restored to its former glory in the 90s, although it currently appears to be unused. It’s now dwarfed somewhat by various modern buildings, creating a nice contrast between old and new, and hopefully it can find a new use in the not too distant future.

All traces of the railway have now disappeared, but the hotel is located just a short walk from Gallions Reach DLR station. 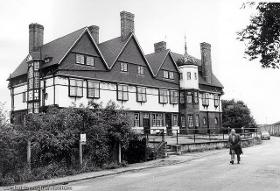 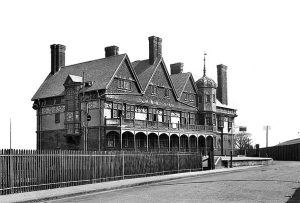 Legend has it that the Galyons is haunted  by ghosts of prostitutes…Don’t be surprised if an unexpected guest joins you while you relax for a drink or follow you to the toilets. A constant presence at Galyons is Annie, our resident ghost. If you feel a presence behind you, or smell a faint waft of perfume, you may have just received a visit. Annie is often seen in a black dress observing visitors and wandering the basement below. Annie has been here for more than 100 years, legend has it she was murdered by Jack the Ripper himself and her spirit roams restlessly and sometimes can be heard singing and laughing. She is not the only resident ghost here, other sightings have been reported of multiple women.

Great food and a great atmosphere!! Well worth a visit!!

Great pub & proud to call it our local!